The moment I knew we were somewhere different came at dinner about a week into our exchange.  We were eating in a small room in the back of a hookah bar. There were platters and chaffing dishes full of food – seasonings I didn’t recognize, colors of yellow and rich brown. I had no idea what kind of meat it was, but I saw a leg piece – at least I THINK it was a leg piece – and I bit in. The flavor of the meat hit me all at once and mixed with the smell of the tobacco and smoke. I had no idea where I was or what I was eating, but I loved it.

When I got the call asking me to join a group to Tunisia and Egypt in 2012, my first thought was, “Egypt!  Amazing!  Pyramids!  Cool!” As almost an after-thought, I wondered – where the heck is Tunisia? I had to grab my daughter’s atlas to find this small country, sandwiched at the top of Africa between Libya and Algeria. I saw our visit to Tunisia as a nice stop on our way to EGYPT! – the land of history, mystery, and the Sphinx.

Never would I have guessed that our visit to Tunisia would be the highlight of my ACYPL experience, and one of the best places I have ever visited in my travels.

Tunisia is a wonderful mix of history and tradition, and efforts to modernize. Among the ruins of Carthaginian and Roman occupations are markets, office buildings, and highways. I was struck by the cultural mix of Arabic and French throughout the country. Even their French, the primary language, is a mix of French and Arabic. The mindset of the Tunisian people was more Westernized than I expected, in part because of the French occupation from the 1880s into the 1950s. This unique mix of east and west has created a culture in Tunisia unlike any other.

I cannot say enough about the people we met in this wonderful country.  We visited very in December 2012– soon after the Jasmine Revolution of 2010. The Tunisian people were working to build a parliament and rework their constitution, and move towards free elections. We met with leaders of political parties and elected officials struggling to determine the best path forward for their people among a great deal of political instability.  We met with youth struggling to find work and find their voice. The youth lead the Jasmine Revolution wanting something better for their country; now, they had to figure out how to rebuild in this new political world.

While the media and Western news showed Tunisia as a chaotic hotbed of insurrection, I found it to be very, very different. We walked the streets, visited peoples’ homes for dinner, and ate fresh fish from the Mediterranean at small cafes on the street. Our hosts, members of Tunisian American Young Professionals (TAYP), were passionate about bringing Western business interests to Tunisia, from internet and cable service providers to tech companies and retail. Many investors and business developers we met with believed that the key to Tunisia moving forward was economic development. Their workforce is highly educated, but their young people (at the time) suffered from an unemployment rate of almost 50%. These talented young people wanted to work, and wanted to bring new vision and industry to Tunisia.

Much has been noted about terrorism in Tunisia; we did see some damage during our visit, including at the US Embassy. I was struck by the reaction of the Tunisian people to these acts of violence – they were embarrassed and angry, not celebrating these attacks as is often portrayed. The vast majority of the Tunisian people want to move forward. They believe in democracy and modernization, while holding to the cultural traditions that make them unique. This was clearly evident when we visited a woman-owned business manufacturing makrooh (date cookies similar to fig newtons).  As a small business owner myself, I was struck by her drive and entrepreneurial spirit. She started with only a few employees – all women – but now had 10+ workers and drivers delivering her makrooh to hotels and restaurants throughout the community. She didn’t see herself as a revolutionary, but in the simple acts of hiring women, using local products, moving commerce throughout her region, she is, in fact, revolutionizing the way they do business in Tunisia. 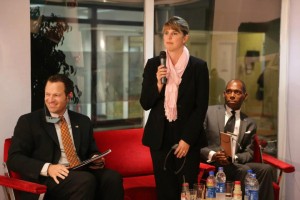 My visit to this remarkable country did not end in December of 2012.  I continued to stay in contact with people we met there, and I meet up with one of the members of TAYP in Washington, DC when we’re both in town and remain friends on Facebook (thank you, Internet) with several of the TAYP leaders and others who opened their homes and lives to us.  I continue to read with interest this small country’s efforts to move their revolution forward in large ways, such as free elections and the passage of a constitution, and in small ways, like developing better public health standards and encouraging investment in business.

Even as I want to help them, to get involved, I learned one very important lesson while traveling with ACYPL – every country must find their own path to success. If we, as the United States, or even as big business, force our own ways onto their culture, they will never own their own path forward. Their final governmental structure may look little like what we had envisioned for them – but it will not be their own. And the people of Tunisia, so remarkable, bright and welcoming, will find their path. Of that I am sure.

I will return to Tunisia.  I will bring my kids and my husband, introduce them to Hatem, Firas, Mohammed, and others who made my experience unforgettable. I hope to take them to the woman baking cookies, and to wander the streets of Sidi Bou Said to look at the beautiful blue doors. And I hope to see this wonderful, fierce nation continuing to make progress towards their democracy and their vision for the future.

Holly Chisa is the owner of HPC Advocacy.

Never in my life do I remember an out-of-the-blue phone conversation that turned into a transformational experience. When Kaylee Boalt, from the American Council of Young Political Leaders...